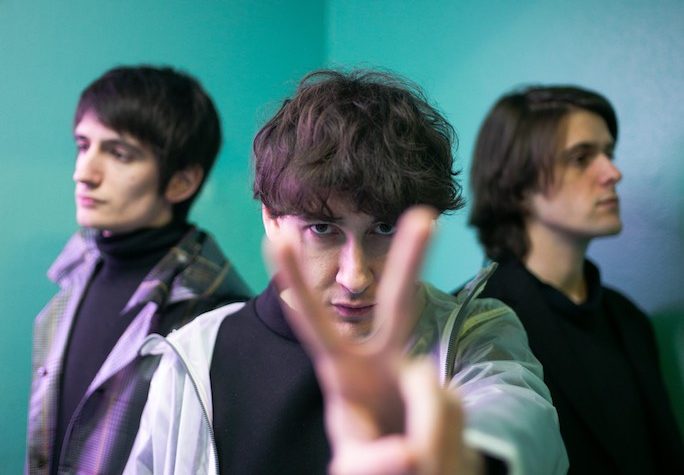 The festival is coming along in leaps and bounds and we have the complete program for you. This year’s festival is under the banner of “British Editon” and will be bringing the most interesting of young British music. Featuring bands such as The Sherlocks and Husky Loops, who have previously performed with such stars as the Arctic Monkeys and Placebo. In addition, there will be countless other musical discoveries from around the world.

The main star will arrive on Friday

The program will start on Friday afternoon, when Karlín Square will be painted in British colours and will become the “British Island”. The centerpiece will be the Karlín stage in front of the church. The festival will be kicked off by the energetic band Zrní, who had their mainstage premiere at the United Islands of Prague festival years ago. Followed by the young talented Irish singer-songwriter David Keenan (IRL) and Czech rock quintet Povodí Ohře.

After that, the most anticipated concert of this year’s festival will come in the form of the British indie-rock quartet The Sherlocks (UK), who have already achieved such successes as opening for the Arctic Monkeys and playing the renowned festivals in Leeds and Reading. As if that were not enough, they can currently be seen in the advert for Skoda cars, currently being shown in Britain.

Their stunning show does not signal the end of Fridays festivities however.  You will be able to embark on the traditional Club Night and see many interesting acts in several Prague clubs that will also be open for free under the banner of United Islands.

From the morning on Saturday the Karlin stage will celebrate Children’s Day.

The main festival day will be on Saturday, when the festival will spread from Karlínské Square all the way along Křižíkova Street and up to Invalidovna, where the Island of Freedom stage will be based in Kaizlovy sady to celebrate thirty years since the fall of the Iron Curtain. The morning program on the Karlín stage will be dedicated to all children celebrating Children’s Day. The celebration will begin with a performance by the popular trio Bombarďák, who will delight not only children but also parents, with a concert full of wild songs and crazy dances. There will then be performances by the choirs of Prague 8.

On the Karlin stage, Czech and foreign stars will be appearing. In the role of headliner for the Saturday evening will be London’s Husky Loops (UK), a rock trio, who were last seen playing before David Byrne at last years Metronome festival (this year it will be for the first time split across 21 and 22 June) and they have toured with bands like Placebo and The Kills. No less interesting will be the performances of other foreign performers, which include Scottish band The LaFontaines (UK), Belgian quartet Portland (BE) or English songwriter Alasdair Bouch (UK). There will also be artists from Czech. The controversial showman Kapitán Demo will play his only Prague show for a long time at the United Islands festival and will bring to the big stage the winners of the Discoveries of United Islands. This year, it will be the Beroun indie-rock band Save The Emotion who have a singer with American roots.

The festival will also bring the Island of Freedom

One of the festival’s main program lines this year will be the Island of Freedom celebrating the 30th anniversary since the fall of the Iron Curtain, which will be based in Kaizlových sadů and the Czech Art Freedom Stage will bet he heart of it. Here, in the role of headliner are the four-piece Polish rockers Trupa Trupa (PL) with their remarkable mix of punk, psychedelia, pop and noise. Another musical attraction is the trio The Deadnotes (DE), whose concert takes place with the financial support of the Czech-German Future Fund. The Czech scene will be represented by the band The Atavists (CZ), rapper MC Gey (CZ) and the discovery Sergeant Jammer (CZ). The energetic sound of the Hungarian band Saverne (HU) or the Bratislava trio Walter Schnitzelsson (SK) will also make you dance.

More stages will also bring a lot of entertainment

Yet more stages will bring a fully loaded program. One of them is the Radio 1 stage. Which will also be Broadcasting a live stream throughout the whole day. There will be plenty of interesting musicians headed by the London-based energetic quartet, Island (UK), who are already selling out halls around the world. Other attractions include the Austrian bands Tents (AT) and Mickey (AT), singer Žofie Dařbujánová from the increasingly popular Mydy Rabycad as Zofie Dares (CZ) the musicians of New Sound Orchestra (CZ).  The Radio 1 Stage is supported by Karlin Group.

Another traditional favorite is the Czech Radio Jazz stage, located this year at Lyčkovo Square, where  there will be performances on Saturday from the early morning. For example, you can look forward to the Robocobra Quartet (UK), a unique jazz formation from Belfast, which combines elements of punk and poetry. The Czech scene will be represented by Mantaban (CZ), Zabelov Group (CZ) and the fresh jazz discovery The Track Inspection (CZ).

An equal partner to all the aforementioned scenes will be the traditional Open Mike stage, which will show well-known as well as lesser-known names and give the audience a daredevil opportunity as well. You can find the scene right next to the Křižíkova metro station, with thirty musicians on stage and the and an evening celebrating the icon of the Czech songs Jiří Dědeček.

There will also be an attractive accompanying program

The event center will be Křižíkova Street, which will transform into a pedestrian zone with a number of different activities during the festival weekend. There will also be stands of non-profit organizations and a show of trabants. Children can also look forward to a lot of fun as well, with the chance to meet the Czech Television mascots Bob and Bobek, Večerníček or Sheep.